Required cookies
Strictly essential to ensure the correct functioning of the website.
Analytical cookies
Allow us to know how users interact with the website and to improve its performance.
Save configuration
We use cookies to improve your experience on this site. By continuing to browse our site you agree to our use of cookies. For security and the best experience, please use the latest version of your browser.
Configuration Accept all
News&Notes : 2017
Entries for 2017
Years
2016 (6)
2017 (8)
2019 (4)
2021 (3)

The design of Magasin

I’ve always been fascinated by typefaces based on fluid handwriting, and as an amateur calligrapher of copperplate, I decided to design Magasin as a display font based on this experience.

My first approach to this project began with the lettering I designed for BoMo, a graphic design studio, in spring 2011. It’s based on a brief: feminine, professional and sensibility. The solution came as a well-crafted series of ‘calligraphic letters’ with high contrast, the B, the M and the o, combined as two connected syllables. During the design process, I discovered the significant potential that this idea could have if it were developed as a typeface. Thus, almost one year later, I began to sketch it, and two years after I released it!. It evolved from the initial three letters of the logo but with differences: slightly less condensed proportions, different designs for the two upper case letters and a new construction of the connecting strokes.

It combines a sense of script with a geometric and slightly condensed structure resulting in idiosyncratic curves, yet with a retro-chic twist. These might probably be the most attractive features because of all together they give a very strong identity to words.

During my research, I review a lot of previous & excellent typefaces sharing a similar idea, but any of them had this sense of a connected and upright script. Somehow, Magasin explores and pays tribute to the charm and playness of typefaces that were designed during the 1930s. Some inspiring references are Corvinus, released by Bauer in 1935 (designed by Imre Reiner in 1934), Quirinus (Alessandro Butti,1939) and Fluidum (1951), a kind of non-connected script version of Quirinus, also designed by Butti for the Nebiolo type foundry. 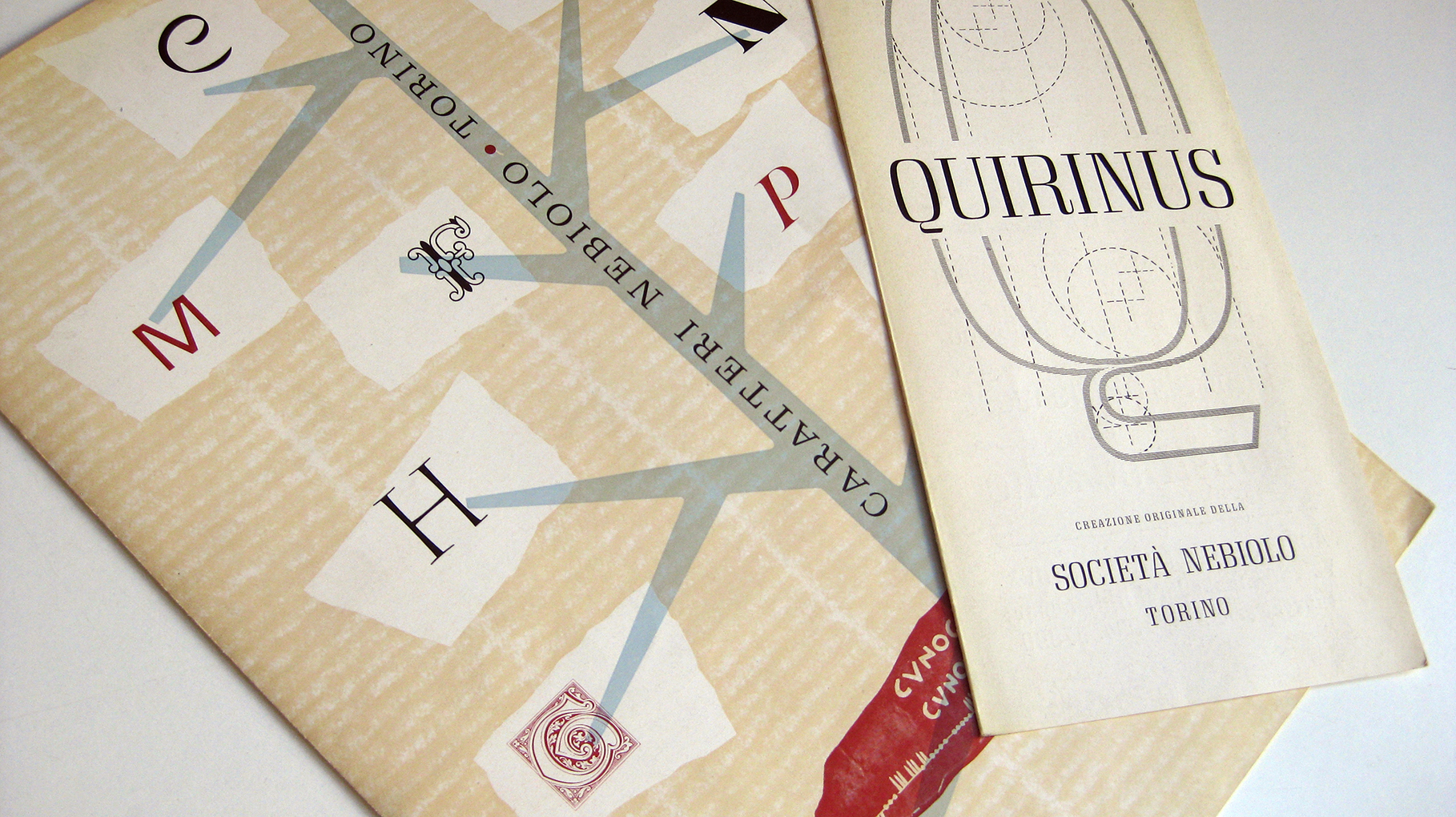 Cover of a catalogue of Cararteri Nebiolo and a Quirinus specimen, a typeface designed by Alessandro Butti in 1939. Both published by Nebiolo in the 1950s 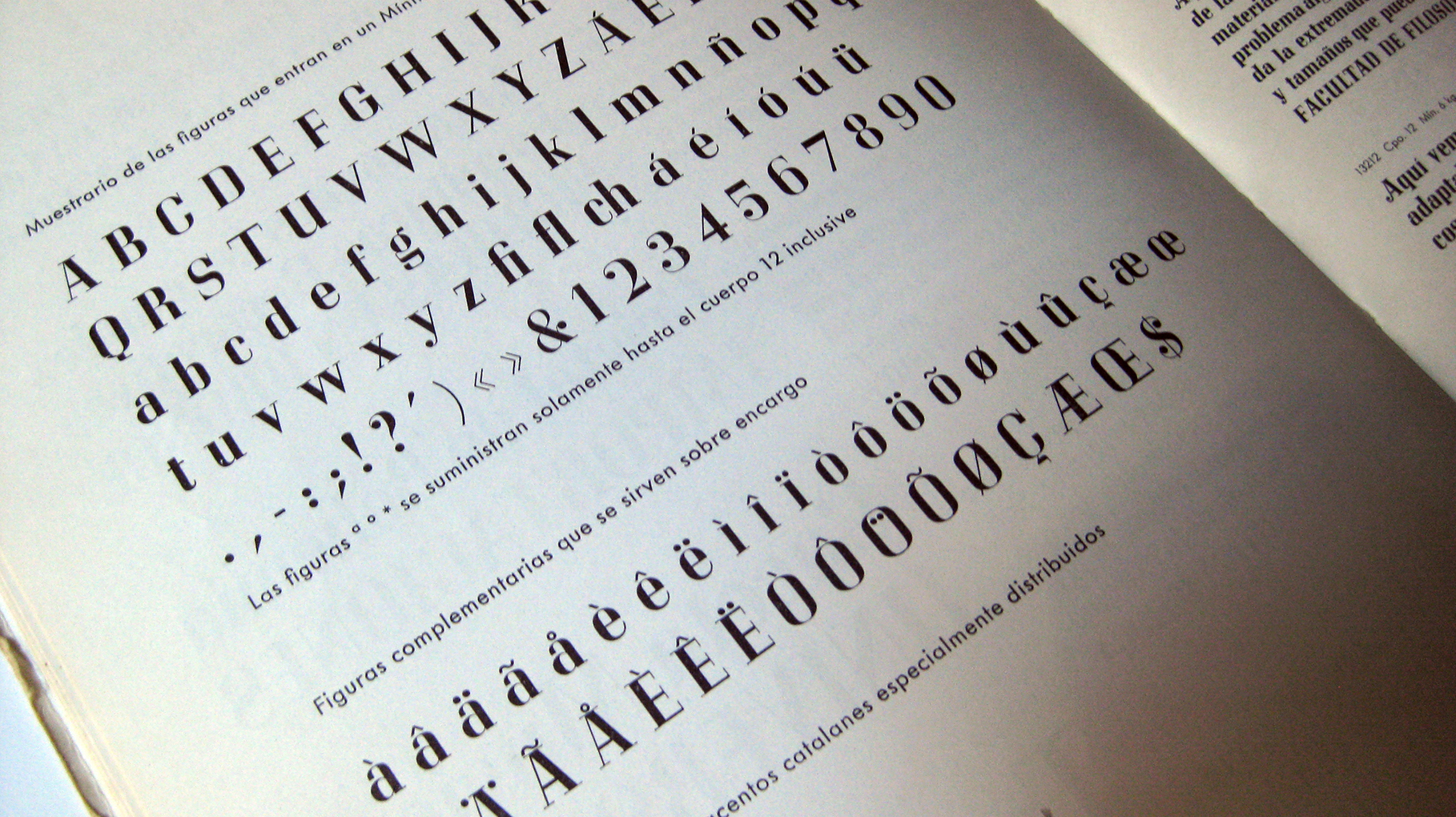 A page from a 1950s Neufville catalogue showing the semibold weight of Imre Reiner’s Corvinus (1934), released by the Bauer Type Foundry in 1935. 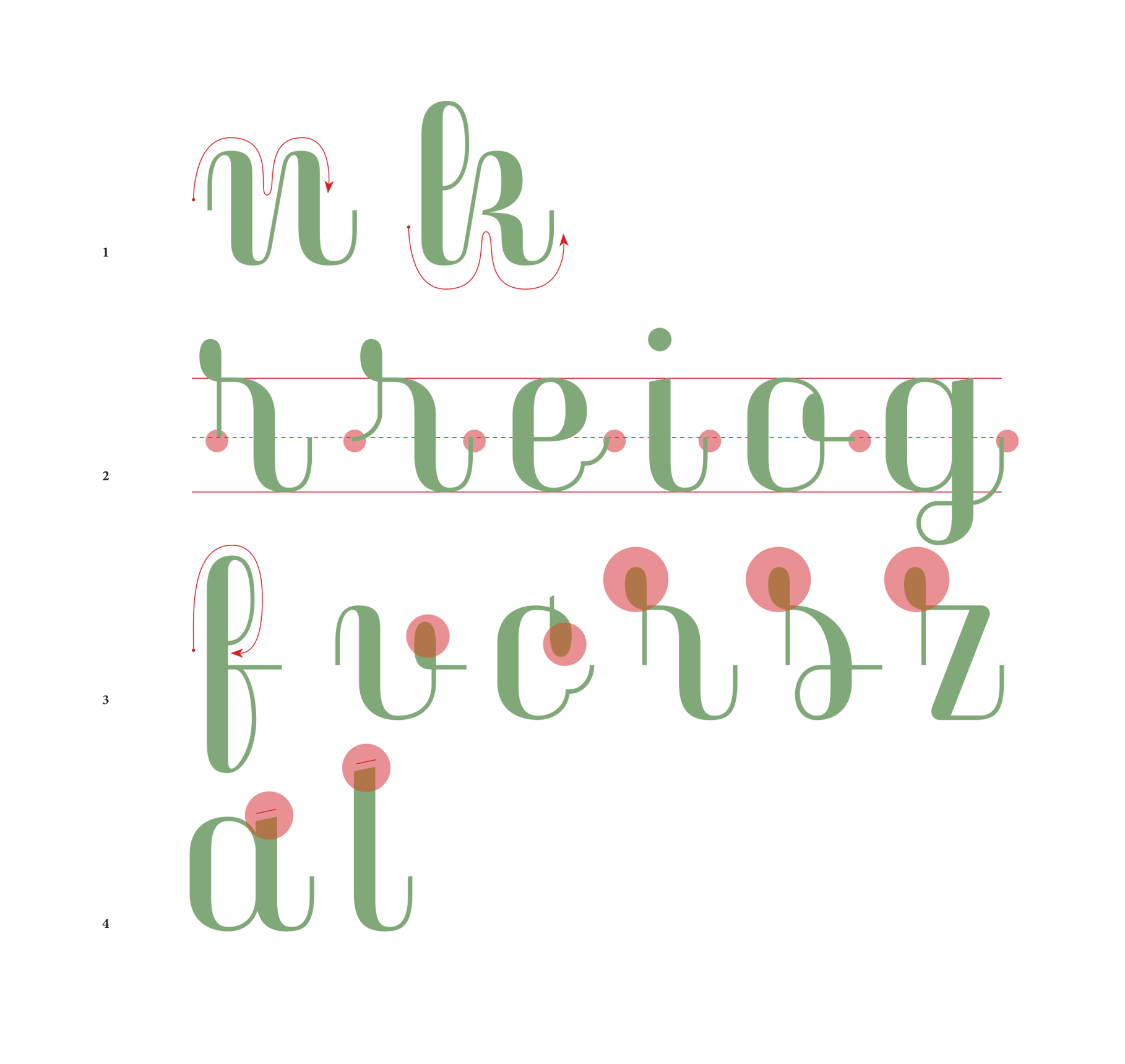 Magasin is based on the idea of designing a display typeface inspired by the pointed pen calligraphy with geometric, upright and connected construction and high contrast. What I wanted to show is the obvious accuracy that can be seen in any calligraphic work, but with a close attention to the creative combination of linked letters when creating words, bringing a lettering flavour.

The contruction principles are:
1/the wavy shapes to emphasize the ryhthm
2/the four different way of links, always merging in the half of the x-height
3/the loops and drops evocating the pointed pen calligraphy letters
4/ the angled ending stroke 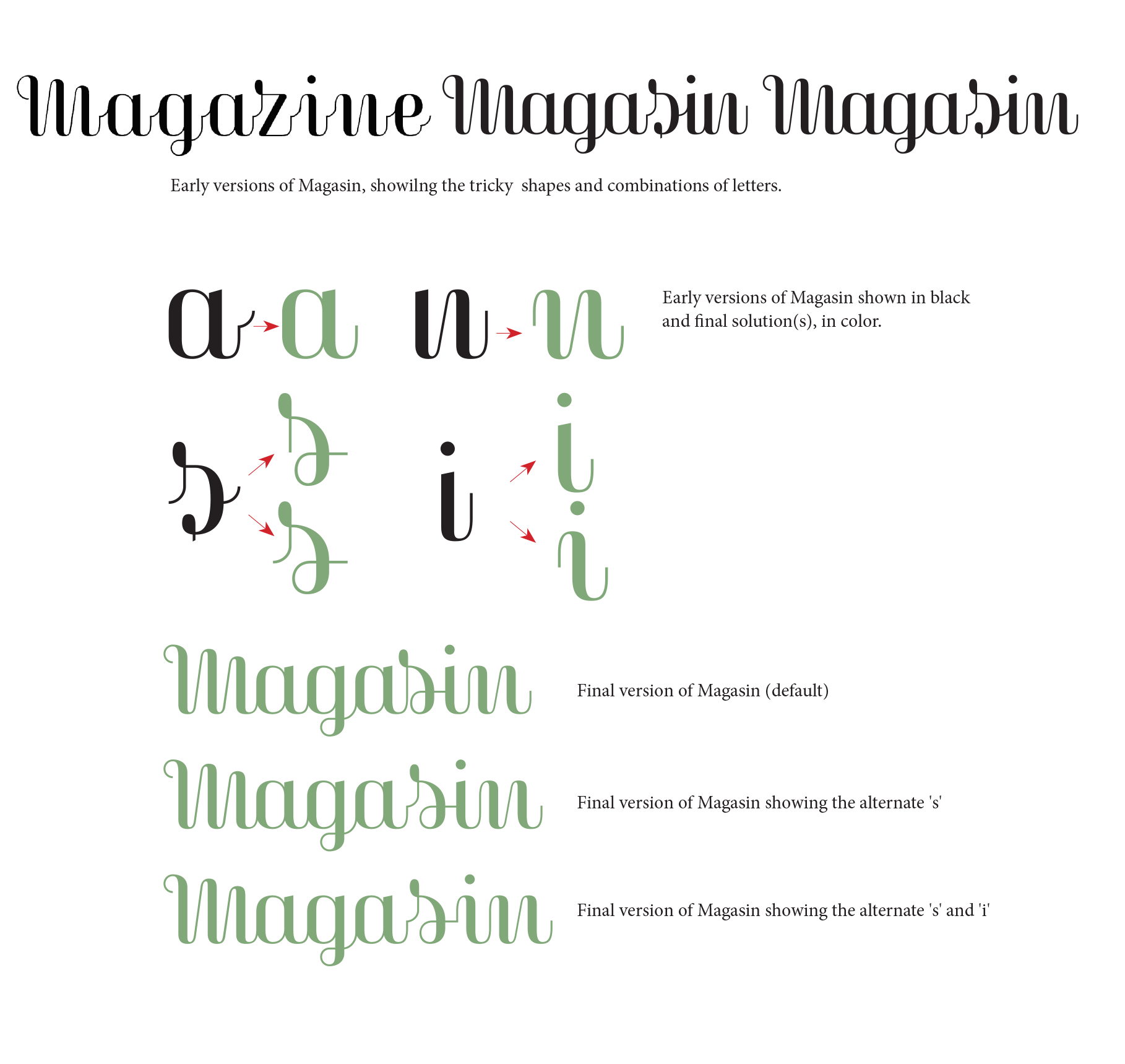 The first versions of Magasin were more experimental; I gave an extraordinary leadership to the connexion strokes, and characters as 'm' and 'n', had a different starting stroke, but soon I found it problematic.The following versions were based on the exploration and refinement of some characters and the different connexion possibilities, with the goal of balancing the spacing, a process that also led to the design of alternative glyphs. 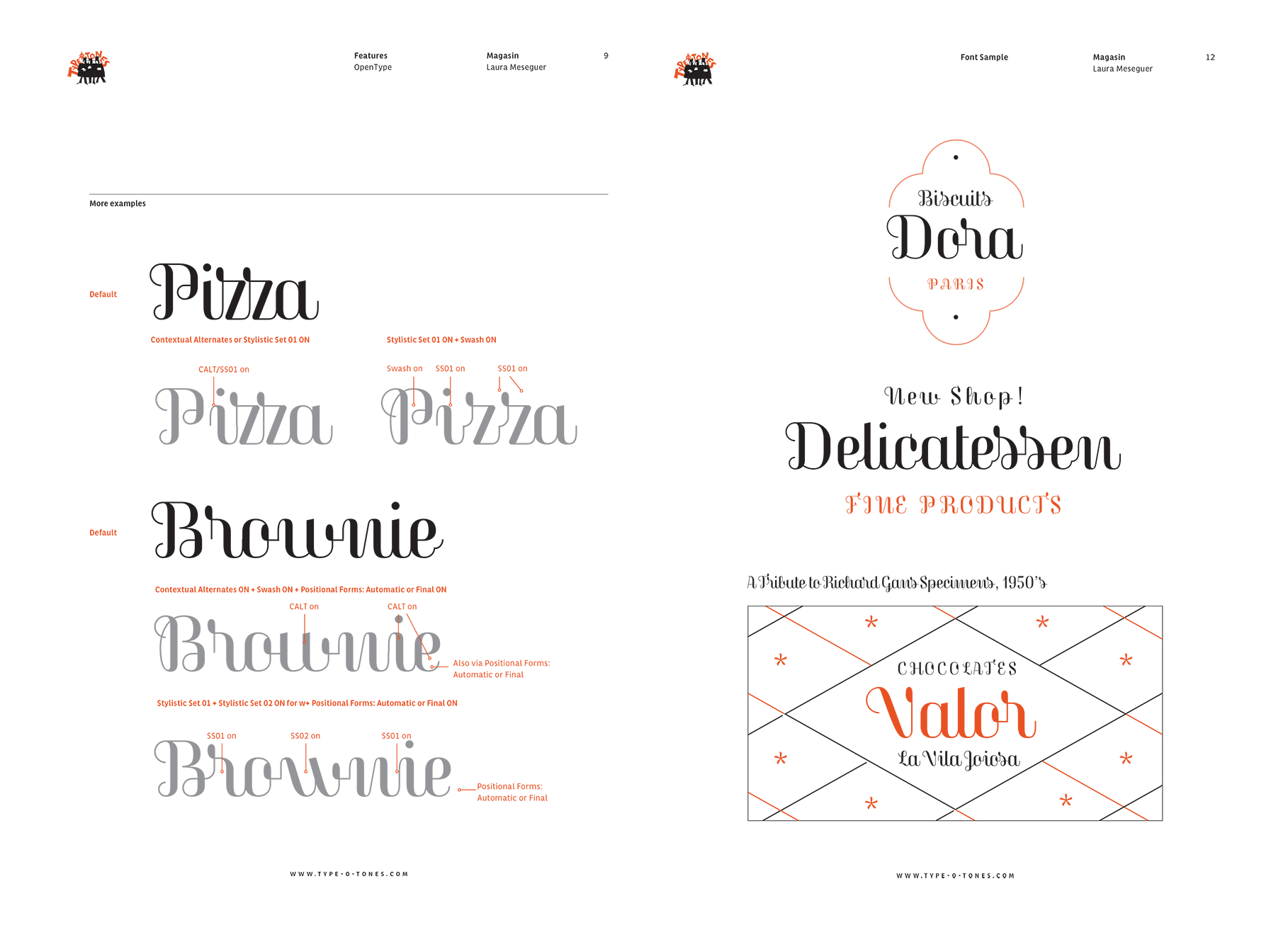 At a certain point, I was not sure if it could become something usable or just a personal amusement; some connexions were looking really weird but others just came automatically and in a very beautiful way. So I wrote a list of necessary ligatures to balance the text flow and another of the non-convenient combinations that later became 'exceptions' in the programming. I also designed a reduced set of secondary alternates (ss02) and an out-strokes version of the 'c', 'ç', 'e' and 'q', to gave a better ending to sentences or words. Therefore, it implied a bunch of OT programming for a correct use and performance. In the specimen I designed, that's thoroughly explained, and downloadable at the typeface's page. 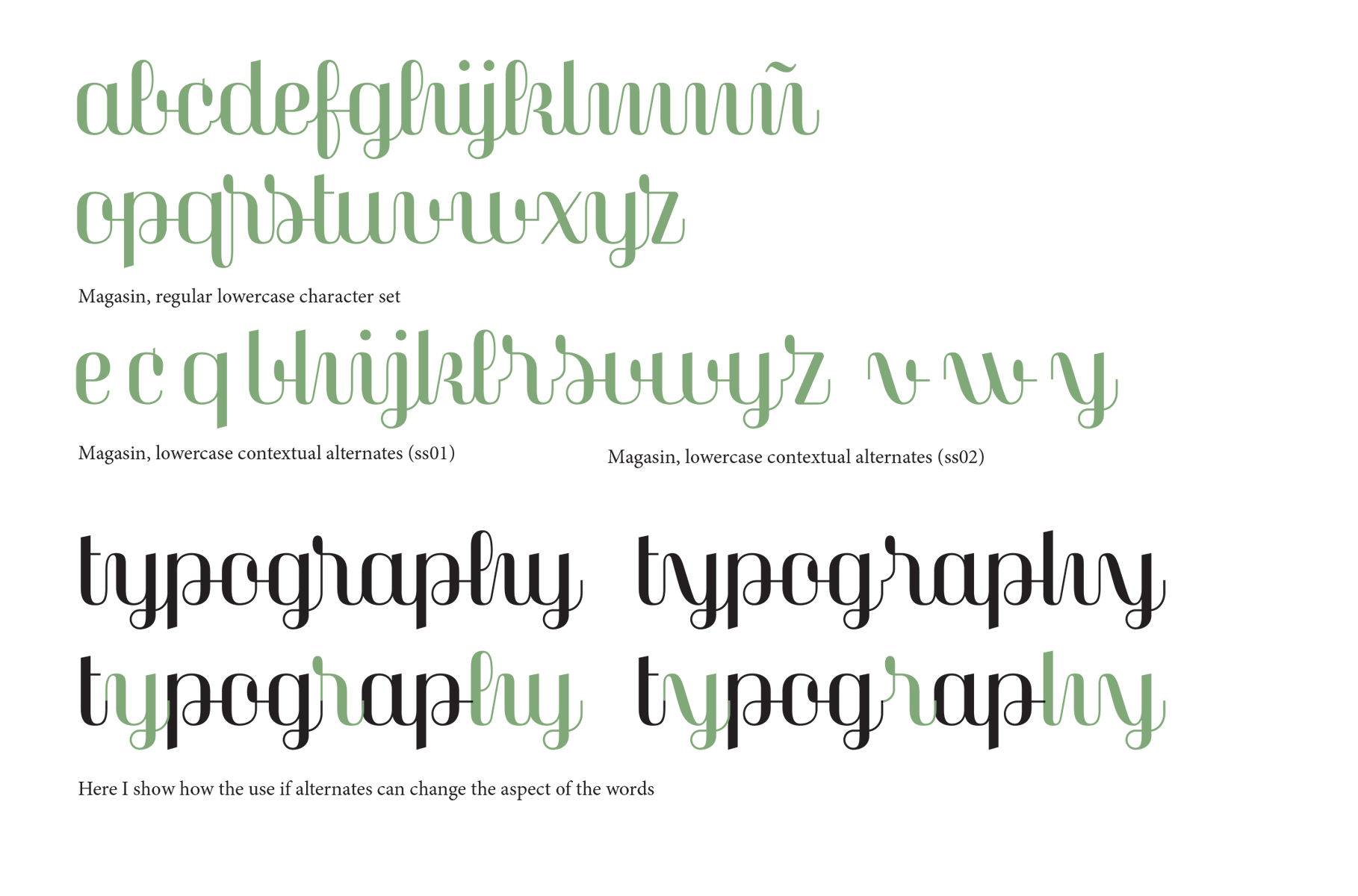 Different possibilities depending on the r s and z glyphs used.

During the process I took care of all the possible combinations – the designer can choose which one suits better– but this was not like this for all the pairs, so I designed all the ligatures needed, they are included per default, the set is not restricted to the fl, fi…etc (image below)

The capital letters appeared much later, they are a bit experimental and very much inspired by the copperplate calligraphy mixed with some cancelleresca features.
While testing it, I realised that Magasin could be very useful in a lot of applications, and for many various moods; moreover, the swash capitals were intentionally designed to ‘pimp’ words and provide many possibilities, but normal capitals can also perform better in certain situations.

And finally… why this name?
I only chose the name at the end of the process, it sounds like ‘magazine’ in English, but actually, Magasin is the word for ‘store’ in French because I always imagined Magasin used in magazines headlines, but also for brands and packaging. I’ve enjoyed working on Magasin immensely, and I learnt a lot, as it always happens with every typeface I design. Because I love and collect old specimens, my typeface and the specimen are also a celebration and a tribute to all those works of art and their designers.